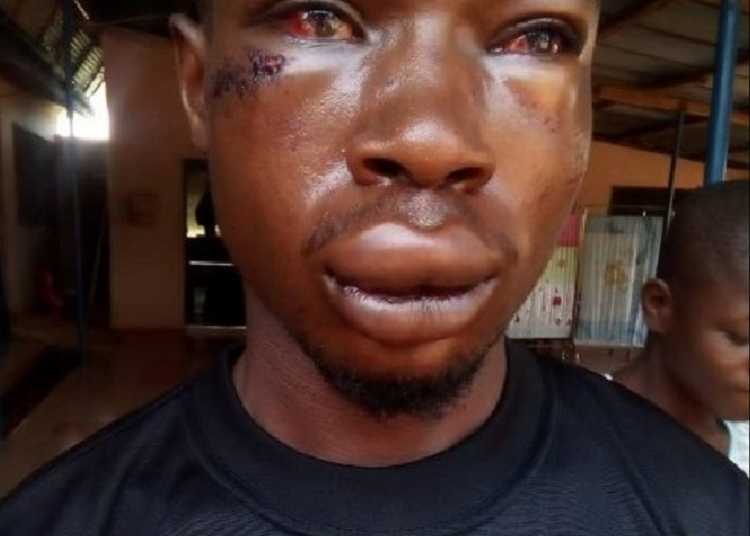 An officer with the Criminal Investigation Department (CID) of the Ghana Police Service at Donkro Nkwanta in the Nkoranza South Municipality has allegedly brutalized a student of University of Education, Winneba, for allegedly flirting with his wife.

The victim, Hayford Osei, who suffered multiple cuts on his nose and mouth, is currently nursing his wounds.

The offending officer has been identified as Ebenezer Antwi, but the authorities at the Donkro Nkwanta Police Station refused to comment on the issue.

The only response they gave when DAILY GUIDE contacted them was that investigation was ongoing and they could not comment further.

According to information, Hayford’s elder brother used to date the lady at the centre of the issue but broke up with her before the lady dated the police officer with whom she now has a baby.

However, sources say anytime she sees Hayford, she demands money from him because she used to be his elder brother’s girlfriend.

On May 7, 2020, at about 11:00 pm, Hayford, who was doing online examination on his phone due to the closure of schools as a result of the Covid-19 pandemic, said he received persistent calls from Serwaa demanding GH¢5 to buy pampers for her baby.

However, the persistent calls from Serwaa was disrupting his work on the phone, so he asked her to stop calling him and promised to give the money to her later in her house.

“So, I went to her house at about 11:00 pm and she gave me a chair to sit on. But all of a sudden, somebody gave me a hefty slap on my face from behind. I fell down and the person continued to give me hefty blows till blood streamed on my face while the lady stood aloof for his husband to brutalize me. I lost my phone in the process. I had to run into the nearby bush to escape death,” he narrated.

He said he lodged the case with the same police station where the suspect is stationed, adding “I was afraid he might not receive justice so I reported the issue to the media as well.”